Taxis, TNCs and Deregulation:
Is History Repeating Itself?

Learn More About regulation and why its needed

What is Regulation and Why is it Needed?

However, the modern market place deems regulations as anti-innovation and anti-competition. It’s often argued that rules and regulations are unnecessary because market forces can effectively regulate companies.

The History of Taxicab Regulation And Failed Deregulation

While regulation may not be beneficial or necessary for other industries, history has proven time and again that the taxi industry is different. An unregulated taxi industry is harmful to everyone – consumers, drivers and operating companies.

During the Great Depression, people jumped at the opportunity to drive unlicensed taxicabs at the absence of stable jobs. This caused an increase in accident rates, poor insurance coverage, and a painful level of road congestion. As a result, American cities quickly enacted laws to address safety, liability and driver rights issues.

Fast-forward forty years to the 1970s and early 1980s, a political era of laissez faire, and suddenly – after decades of prosperity – a wave of deregulation alters the taxicab industry. Local governments in more than twenty cities enabled open-entry and removed regulations on fares, licensing and accessibility requirements. These cities included: Atlanta, Indianapolis, Milwaukee, Kansas City, Phoenix, San Diego, Oakland, Portland and Seattle among others.

However, deregulation in these cities proved to be a failure for many reasons. In just a matter of years, almost every city re-regulated its taxi market because:

We cannot afford to face these issues again.

“Those who cannot remember the past are condemned to repeat it.”

Unfortunately, with the deregulation of for-hire transportation services like uberX and Lyft, we may be experiencing the same consequences that resulted from the anti-regulation movement of the mid 1970’s and early 1980’s. In modern-day markets where Uber and Lyft are lightly regulated and maturing, (like San Francisco, Los Angeles, Washington DC and Chicago), the results of past year’s deregulation experiments are resurfacing.

If the past provides any indication, we are in trouble.

Let’s take a look at many of the familiar issues that we're experiencing today:

The quality of service is Decreasing

As we saw in the 1970's, quality is slowly decreasing because of an increased supply of drivers and a decrease in driver earnings. As Uber matures in large markets, we will likely see vehicle quality decrease and inexperienced drivers continue to struggle with the responsibilities of being a professional driver.

By looking at the tweets below, one may think that the aforementioned decline in overall service is already happening.

PRices Are Rising and Riders are being gouged

Uber is playing the race to the bottom game with its uberX services. It's trying to undercut its competitors - including taxis - with predatory pricing in hopes of killing off competition and dominating the transportation market.

This is great for consumers... at the moment.

But Uber also employs "surge pricing" to incentivize its drivers to work increased hours and drive during peak-demand times. This has led to consistent passenger fares that are deemed well above what's fair and reasonable, as well as many unhappy customers. We call is price gouging.

And it's only getting worse. A lot of people are now complaining about a seemingly permanent state of surge pricing.
What happens when Uber is the only competitor in your area? And what happens when drivers are yearning for more income and the company's investors are asking for higher returns? If history is any indication, it's not good – for anyone.

Taxi service today is currently accessible for all - including low-income riders and people with disabilities. Yet, without regulation it will soon be accessible for the wealthy and the privileged – and no one else.

The most alarming trend of a deregulated taxi environment is the rate at which safety for the general public declines. Aside from technology, there's little difference between the Great Depression's unlicensed cabs and today's "rideshare" services. Both used/use untrained, amateur drivers due to limited barrier of entry... and the vast majority did not/do not have the commercial insurance in place to meet the needs of for-hire transportation realities and inherent dangers.

Unlike drivers in the 1930’s, "Rideshare" drivers today go through a degree of background checks. However, a third-party company performs these rideshare driver checks because it is cheaper (and less effective than taxi driver background checks). Specifically, these third-party checks do not report information from all US Courts and in most cases they only provide convictions for a fixed number of years, seven to ten. Because of the limited background check capabilities, people who shouldn’t be driving commercially are slipping through the cracks.

On the contrary, taxicab companies are required to use “Live Scan,” a fingerprint-based background check of drivers filtered through the Department of Justice and FBI systems that have no time-based or jurisdictional limitations. This system is much more encompassing and is regularly updated.

The influx of untrained drivers with insufficient background checks has led to a variety of alarming incidents, including deadly accidents, sexual assaults, kidnappings, and physical altercations.

We've documented them all here.

Struggling Drivers Are Manipulating the System to earn more

"Rideshare" drivers are being stretched thin with price cuts and difficult operating costs. Many are frustrated at their lack of income. And as a result, driver protests have swept the country for the past year.

Similar to the 70's, many drivers are looking for new ways to earn money – at the expense of their riders.

We've seen an increase in Uber riders complaining that drivers are canceling their rides, only to find that Uber is surge pricing when they look to hail another ride. We've documented this before... and it's only getting worse. 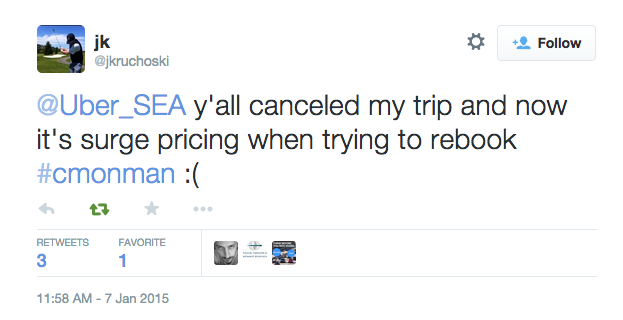 There's even possible evidence that this activity by Uber drivers is actually intentional. And whether it's intentional or not, it's hard to disagree that there's something suspicious going on. 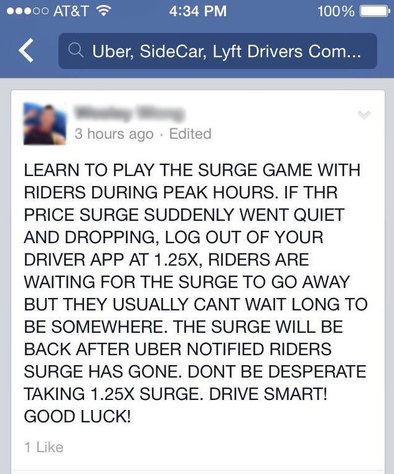 Without rules to govern drivers and companies setting fares, companies have free reign to implement the policies and use the tricks needed to charge riders more money. With drivers struggling to make the income they were promised by Uber and Lyft, why wouldn't they look to manipulate surge pricing to earn some extra income for their services?

Many Are questioning the Effects on Traffic and Pollution

Is the influx of vehicles negative negatively affecting air quality and traffic congestion?

Well, the Mayor of Santa Monica had some harsh words recently: 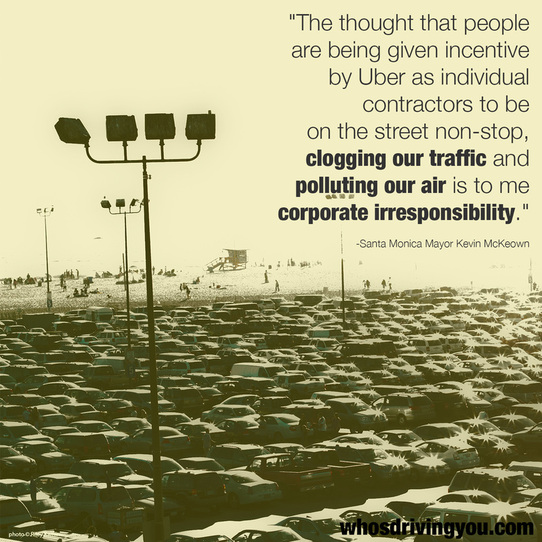 What Do you think?

When it comes to for-hire transportation regulation, is history repeating itself in front of our very eyes? Will we continue to see a decrease in service quality and consumer well being? Will ride prices continue to rise? Will surge pricing become the norm? Is vehicle congestion getting worse?
We want to hear from you. Join the discussion.